Exciting things have been brewing up here at the QYSEA headquarters!

US Nuclear Corp. has recently signed a strategic alliance agreement with QYSEA Technology to market, build, sell, and service Industrial Underwater Robot Sensor Systems in the USA and around the world!

This agreement is an extension for US Nuclear, who has been successfully selling the DroneRAD series- UAVs with radiation, chemical, and biological sensor technology.  Sales for the DroneRAD are already up 777% over last year and are projected to continue increasing.  Robert Goldstein, CEO of US Nuclear Corp, commented: “We will be able to leverage our recent success selling UAV sensors to the UUV market, capitalizing on the similar customer base.

The strategic cooperation with the US nuclear energy company marks that QYSEA has officially entered into the high-end industry applications field in North America,and has become an important milestone in implementing the strategic layout of the company's global development in its long term plans.

This is tremendous news for us at QYSEA, where we believe we will be a perfect match for US Nuclear, as we look forward to providing unmanned robots that will have the ability to detect radiation, chemicals, and biological pollutants underwater and open a new world of underwater exploration.”  QYSEA will be responsible for supplying the industrial underwater robot, cameras, and locomotion control, while US Nuclear will install the radiological, chemical, and biological sensor packages in addition to the data collection/transmission software.

The alliance is based around our three underwater ROVs: the FIFISH V6, P3, and X6, where some of the unique features of these robots include: 4K UHD footage that can be live-streamed, a maximum depth of 100m, 6 degrees of freedom for nimble manoeuvrability, powerful 4000 lumens LED lights, high definition camera with 1” Sony® CMOS sensor- 20 Megapixels with f/2.8 aperture, and a 166° ultra wide-angle field of view.  There are many applications in our UUVs including underwater photography, filming, and ocean exploration.  US Nuclear’s addition of chemical, biological, and radiological sensors now allows these underwater robots to collect important factual data, such as for: 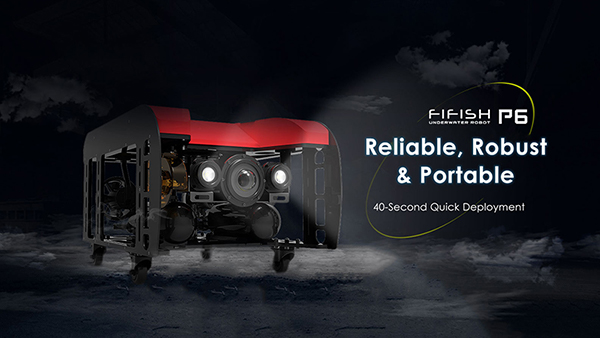 Here’s to an amazing international partnership that will push the boundaries of drone technology and underwater innovation!